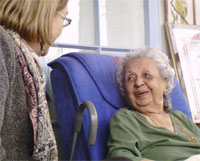 Continuing the Interview with Lakshmi Kripalani By Irene Baker

In the first part of our interview, Ms. Kripalani, now almost 93 years old, described her life growing up in India, her early teaching experiences, and taking the primary training course with Maria and Mario Montessori in 1946 in Karachi, India. In this second installment, she continues the story of her training.

(Irene Baker) How long did the training course last?

(Lakshmi Kripalani) Dr. Montessori gave the course for eight or nine weeks, and then we had to do the practice teaching to get the certificate of attendance. Then we had to work in a school for one or two years, get supervised, and then get the diploma. When I took the examination, I got Practical Life which was easy. But math was my specialty and when I helped another student with fractions, Mario was so impressed he appointed me to be the translator for those who took the examinations in Sindhi.

(IB) Sindhi is your mother tongue?

(LK) Yes. There were equal numbers of those who took it in our language and in English. So the organizers of the course got annoyed with me that I accepted the job because an older man, a language specialist, was translating but didn’t have the fine movements for the presentations. The whole community was against me; they said that I insulted them. I was a little girl at the time. I wasn’t even aware of this “disrespect.”

(LK) I was 22. I got a score of second class, not first class. Mario said, “You don’t deserve this. Your people have done this to you.” Mario wanted to give me the first class but they gave me second class. I put the certificate in his pocket and said, “If you don’t feel I deserve it, take it back with you.”

Forbidden to Work with Dr. Montessori

(IB) What did you do after the training?

(LK) Father wouldn’t allow me to go work with Dr. Montessori even though she invited me. She told me to join her to assist them and carry on the work. I was very happy, I would have gone.

(IB) What an opportunity that would have been!

Lakshmi put her hand up in a dramatic gesture and then let it fall.

The end of British rule and partition of India occurred in 1947, resulting in the new states of India and Pakistan. Violence escalated, many died, and 12 million were displaced as Hindus left Pakistan for India, and Muslims left India for Pakistan. Ms. Kripalani recalls how she and her family fled Pakistan for Bombay on a ship. Although they lost everything, Ms. Kripalani was able to save her albums and her precious copies of Dr. Montessori’s lectures, which she held tightly on her lap. “I have been carrying them in my hand wherever I go,” she declared.

Starting a School in the Refugee Camp

(LK) I was in Bombay in the refugee camp and I started the school.

(IB) Where you showed what can be done without any materials.

(LK) You see if you have the understanding you can create. When Lady Mountbatten came to visit, she was so fascinated that the ground of the school was all decorated with flowers.

(IB) Because you were using buds as units, flowers as thousands.

(LK) (Nodding) There were enormous trees and you could cut down the flowers and use as many as you want. One child doing addition, another doing division with all of these flowers. The children wrote with branches on the ground. So the ground was our record. In one way I have done the job and I have been creative.

(IB) Very creative. Many people would have been in despair and given up.

(LK) Oh yes. When I got to the camp, they were distributing milk. The children were screaming and trying to get the milk. I said, “Who is in charge?” My question was angry!

The officer said, “Who are you? You don’t belong here!”

I said, “What is this massacre going on?”

“These are your people. They don’t know how to behave.”

I asked, “What is the problem? Do you have enough milk?”

The officer said, “I have enough.”

I told him, “The women want a cup of milk for their children and to take to the tent to make tea so they don’t get a headache. These people have lost everything! What do you think they are crying for?”

He asked me, “Can you handle them?”

“Sure I can handle them.”

The next morning I went and said, “Ladies, you are going to get the cup of milk but please you must control your children. Make them sit on the line and no screaming.”

[It went so smoothly that] the officer asked if I would help in the kitchen. I said, “Yes, but before all that, I need a school for the children.”

He turned around. “We can hardly afford to give you the food and now you want a school! This woman is asking too much! She doesn’t appreciate what we are doing!”

I said, “I want the permission to start the school. I’m not asking for money.”

The officer said, “But there’s no place.”

“I’ll find the place.” I went and came back after an hour and said, “Give me your loudspeaker.” I announced, “We have nothing, but if you want a school for your children, meet me and bring your cardboard boxes.” One hundred people came to the place I found and moved stones to make the ground level for the school. I think I have been in a way courageous to take the bull by the horn.

(IB) How long did you have the school at the refugee camp?

A Reunion with Maria and Mario Montessori

(IB) Did you see Mario and Maria again?

(LK) I was in the refugee camp but somebody told me they were back [from Europe]. I couldn’t get the pass. So, one of the trucks of soldiers was going and I got up in the truck and I stood there. Some people saw and ran to my mother: “What is your daughter doing, getting on the truck with the soldiers?” (big smile)

(IB) You were very brave, audacious!

(LK) You know, I had to see them! There was no bus. Dr. Montessori was not allowing anybody to see her in her room, but I managed to see her. Mario was very protective of her. That’s when he [Mario] gave me the diploma. Mine was signed by both Dr. Montessori and Mario. Mario told me, “Now you will need this to get a job!”

(IB) He enjoyed joking with you.

(LK) Because we had worked together on the stage and I challenged him sometimes. He was very interested in my ability to understand the material. So he respected me until the end. And we were in constant touch.

Well, it was a nice experience. I was very lucky. I have survived, and I have been all over the world. I was just looking at Dr. Montessori’s picture. She died in her 70s and I am here in my 90s! Some people think that her picture (pointing to the photo on the wall) is me; that I look like her.

We took a break to drink some mango juice and I reflected on the many similarities between Dr. Montessori and Ms. Kripalani – their courage and tenacity as they broke out of societal and family constraints, and their devotion to educating children. They both lived through WWII in India during dangerous times. Unusual for the era, neither married, and yet both had sons they loved tremendously. When Lakshmi Kripalani asked for her sister Maina’s first-born child, Maina agreed. Maina was then unable to have more children, so the two sisters shared responsibility for raising the boy, who told everyone (to Lakshmi’s delight) that he had “two mothers”

From India to the United States

(IB) Where did you teach after getting out of the refugee camp?

(LK) In Bombay. The British army school was closed, and the Indian army needed a school for the children. I established a good school. Teaching is an art and not everyone can manage to teach. I taught there until 1962 when I was invited to America to start the first Montessori School in Iowa City.

(IB) In your classrooms, did you do Walking on the Line?

(LK) Always! That was the first thing the children did.

(IB) Did you use music for the movement?

(LK) I used the band! (laughing) In the elementary school where I was working (in India), one of the supervisors saw how I carried on the physical exercises and said, “I want to send you the band! Let them practice with that!” I used to create all of the physical exercise shows. Some things I did I had no training. I think it was an intuitive situation.

(IB) What are you most proud of?

(LK) Seton Hall University honored me. I took some courses but I don’t think I learned from them though. In the classes even the teachers made me talk about Montessori [education].

(IB) What is your hope for the child, for the future of Montessori?

(LK) I hope that people will understand that the children need involvement and freedom to work at their own pace in order to succeed.

(IB) Thank you so much for sharing these precious and inspiring memories with us.

(LK) Well, you know, life is a mystery and I have survived and survived pretty well. I’m a lucky woman; I count my blessings. I’m 92 1/2 years old. Can you believe that I can support myself? I have a roof over my head and food on the table. I’ve seen a lot, traveled a lot, eaten a lot, done a lot, and I’ve been recognized. I’ve gone the gamut of the life. What else could I ask for? 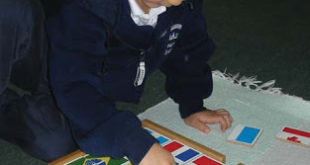