The Long Black Strip: A Lesson in Humility

One hot, dry afternoon in Madras, India in 1939, Maria Montessori was talking with a group of children in the shade of a great, old Banyan tree. A boy, about ten years old, proudly proclaims the wisdom of his Indian civilization, one of the oldest in the world. Perhaps he even wonders out loud how much he can learn from Dr. Montessori and her far less ancient culture.

Later, over afternoon tea, Montessori reflects on the boy’s words, wondering how best to respond. She notices telephone workers laying long black cables on the dusty road as she takes another sip of her strong tea. She and Mario have been working for many months on the elementary curriculum; the Great Lessons have recently been shaped. Motivated by the boy’s comment, Montessori creates”A Lesson in Humility.”

A few weeks later, after enlisting the help of a local seamstress,Montessori invites the boy and his classmates to meet her. Following Dr. Montessori’s instructions, two teachers on bicycles position between them a long wooden dowel, upon which is rolled a huge spool of narrow black cloth. Without a word the teachers begin to unroll the black strip of fabric, laying it on the ground, as they slowly ride their bicycles down the street. Montessori and the inquisitive children follow behind and many neighborhood children join the procession, asking,”What is this? What is it for?”

Montessori is very quiet. Perhaps she says “Wait and see.” Perhaps she does not say a word until the end, when the long black strip has been completely unwound and now at the very end there appears a surprise: a narrow strip of white cloth.

Montessori finally speaks: “This little white part represents the entire time that human beings have been on Earth. Compare it to the black strip, which represents the age of Earth.”

The children gaze back down the street where the black strip has disappeared from sight, and then look again at the tiny strip of white in Dr. Montessori’s hand. Perhaps Montessori smiles at the boy who inspired her to create this lesson. How Long Was the Original Black Strip?

While we don’t know exactly what Montessori said when she gave this lesson, we do know that the original black strip was 300 meters (984 feet) long, the length of three football fields! The beginning of it would have disappeared from view as it was unwound through the Madras streets. Today, most teachers use a black strip that is 100 feet in length, significantly shorter, but still long enough to inspire humility and awe.

The Montessori elementary curriculum has a number of important impressionistic lessons that are meant to evoke wonder, awe, and gratitude. Don’t be tempted to use too many words or facts when you present this lesson. It is much more compelling to present it as Montessori did, with few words so as not to distract from the one key point you wish children to be impressed with: How little time humans have been on Earth. We are latecomers to this planet.

This brilliantly concrete lesson is not meant to be another version of the Clock of Eras or a re-telling of the First Great Lesson. Imagine Dr. Montessori barely speaking as her extremely long black strip was unwound. Think of how much curiosity there was.

Give this Lesson Outdoors

Even if you have enough room to unroll the strip indoors, presenting this lesson outside as Montessori did adds to the drama and impact. After giving the lesson, I always tell children what motivated Dr. Montessori to create it. They love hearing that the original black strip was nearly ten times longer than ours today and we discuss how far from their school that would reach.

When presented well, with minimum words and meaningful pauses, the Long Black Strip can be one of the most powerful lessons you ever give. It is often cited by children and adults alike as their favorite lesson. It truly lives up to the name that Montessori originally gave it: A Lesson in Humility.

Share
Previous The Hand Chart: A Montessori History Lesson
Next For Parents Who Worry (Isn’t That All of Us?) 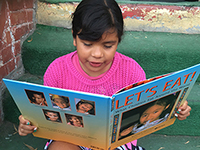 The Fundamental Needs of Humans