The Joy of Geography 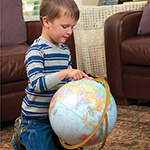 One of the many gifts a Montessori education often brings is a life-long enthusiasm for geography. Geography helps children place themselves on Earth, fostering care for the rivers, forests, oceans, and peoples. Physical geography focuses on the features of Earth’s environment. Political geography studies how humans have adapted to the land, emphasizing settlement and activity.

Geography is the most all-encompassing subject in the Montessori “cultural curriculum.” It creates the foundation for understanding the oneness of the human family, recognizing the basic needs that all people share while appreciating the diversity of how different cultures satisfy those same needs.

We begin with physical geography, introducing three- and four-year-olds to the Globe of Land and Water (Sandpaper Globe). The sandpaper land is rough to the touch; the oceans are smooth. “This is how we see Earth from the sky. This is land. This is water.”

We also introduce children to Land and Water Forms, a Practical Life exercise in geography. As the child pours water into the forms, she has the sensorial impression of, for example, an island and a lake. Naming the land forms using three-part cards and learning the definitions of land forms follow.

The materials in the primary classroom for political geography include the Globe of the Continents (Painted Globe) and the Puzzle Map of the World (typically introduced as a sensorial work), along with the Continent Maps, outline maps, and the flags.

Once children have worked with the globes, we introduce maps. This transition from globe to map is often difficult for a child. You can compare the Globe of the Continents to the Puzzle Map of the World, identifying each continent on the globe, then the map. You could say, “A map is an important tool to show what a big place looks like from up high.” Perhaps you could demonstrate how to make a flat map of the spherical world by letting the air out of an inflatable globe to flatten it. Then compare it to the Puzzle Map of the World.

Five- to nine-year-olds might enjoy drawing maps of their school playground, the lizard’s terrarium, or the route from home to school. A treasure map leading to a hidden command card or object in the classroom can encourage map-reading skills.

Most teachers spend hours researching and gathering artifacts to present the physical and political geography of each continent in turn. Storytelling and photographs can bring the countries and continents to life as we introduce children to:

Invite families who travel to bring back a map, postcard, or souvenir for their child to share with the class. Locate their trip on the appropriate continent map. Tell stories from your own travel adventures to illuminate political and physical geography. Small anecdotes about the roads and rivers on which you traveled, or the cuisines and cultures you encountered, will delight your class. As anthropologist Elizabeth Kapu’uwailani Lindsey said, “True navigation begins in the human heart. It’s the most important map of all.”

There is such a depth and richness to the Montessori geography materials and activities for the primary classroom. Working with these materials lays the foundation for more advanced work, such as exploring different types of maps. Maps of the world focus either on political features – countries, cities, people, and products – or on physical features – land regions, climate, plants, and animals. I remember the thrill I felt as a child when I first heard about the Continental Divide. I found it myself on a relief map, running my finger down the bumpy Rocky Mountain range.

Maps can be astonishing. I once showed our 18-year-old Japanese exchange student my map of the world. She looked at it with shock and exclaimed, “But this isn’t right! Japan is in the center of the world! Not over here on the edge.” I’m sure I would have been similarly surprised to find the United States on the east edge of a Japanese world map.

Looking from space, is there a top or bottom, up or down to planet Earth? Why should the countries of the global north be depicted on top of the world? Older children and adults alike are amazed by alternatives such as the “upside-down map,” which shows Australia on top and all the continents “upside down.”

The Hobo-Dyer Projection map illustrates the world’s land masses in more accurate proportion. (For example, Greenland is much smaller and Africa is much larger.) You may feel disoriented looking at it because, like my Japanese friend, it’s just not what you’re used to seeing!

The Great Nation of Humanity

Using movement, their senses, and intellect, children explore the geography of this amazing planet. They pour the shapes of lakes, learn the names of countries and oceans, taste foods, and sing songs from other cultures. Recognizing the universal needs all people share is an intrinsic part of education for peace. 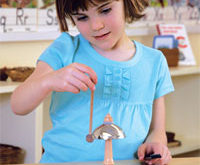 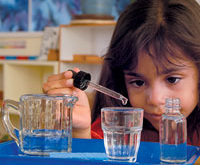 There’s More to Physical Science Than Sink and Float!

The Magic of Color in the Classroom

Color – the stuff of science and poetry, art and beauty. Children and adults love …