Polish Up Your Polishing Activities! 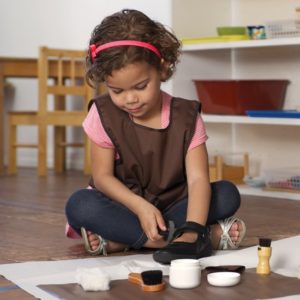 The Quest for All-Natural Shoe Polish

It began with a phone call from a teacher, as so many Montessori Services research and development adventures do. She asked if we knew of a wholly non-toxic alternative to the commercial shoe polish teachers had been using in their activity sets for years. Jane Campbell and Krissy Beoka (the Montessori Services merchandising team) already had an inkling of what finding an all-natural shoe polish might hold… but their duty was clear.

The pair had completed a similar quest to replace the cake glass polish used in Montessori classrooms nationwide a couple of years ago. After the manufacturer discontinued production on this Practical Life mainstay, they scouted high and low for another source. Two years later, that treasure hunt closed with a phone call from an enterprising Montessori teacher (with a chemistry background). She had gained permission from the original manufacturer to make the polish for Montessori schools; Nilsa wondered if we could help make the polish available nationwide…? Soon after, the Glass Polishing Tablets began flying off the shelves and into classrooms again.

When buyer Krissy Beoka started the quest for an all-natural shoe polish, the first thing she learned was that natural shoe polish was going to be just as hard to find as natural glass polish. “I found a company in Canada with a polish made in Italy,” she said, “There was another possibility from a German company.”

Feedback from the children who tried it was less than enthusiastic. Beoka said, “They said it was sticky. And the truth is, they didn’t like the odor.” Cost was the last straw. Jane Campbell, founder and owner, wanted any teacher to be able to afford it. Back to the drawing board.

Then, several recipes for leather conditioner and cleaner were spotted in the book Clean & Green: The Complete Guide to Nontoxic and Environmentally Safe Housekeeping. In the fine old Montessori tradition of teacher-made classroom materials, recipes seemed a good alternative to ready-made shoe polish – provided they worked.

“First, we wanted to make sure that any teacher anywhere would have an easy time tracking down the ingredients. What we can find in Northern California might be different t